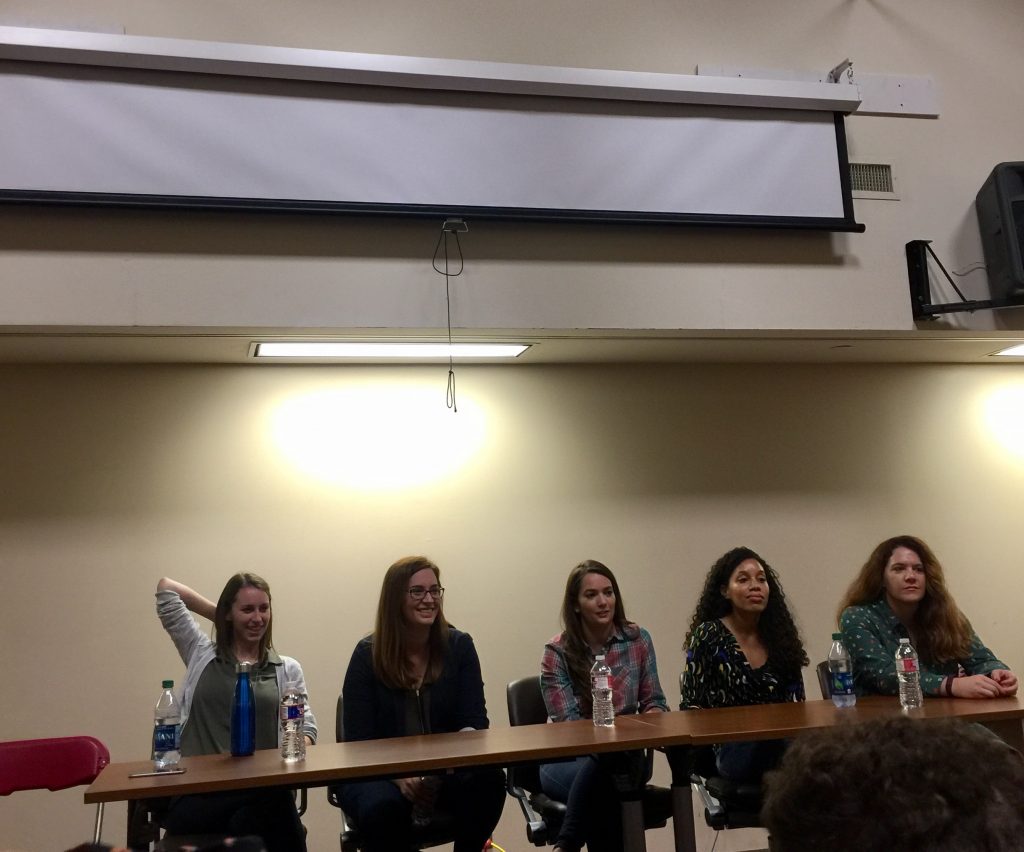 SAN MARCOS, Texas — Five female coders sat on a panel Oct. 18 to talk about their specific jobs and what it entails to be a woman in a male-dominated field.

Kimberly Cook, Rebecca Larson, Ashley Hebler, Erika Toney and Holly Gibson are all women who have careers in the coding world and are graduates of the program at Texas State. While each woman’s job is different, they are all geared toward engineering and computer sciences, which are not fields commonly associated with women.

“I have a degree in theology and had five years of ancient languages. But our college needed a website, so I took a class for Dreamweaver and learned web design and how to create websites,” said Holly Gibson, a web developer at Praxent, a custom software development company, and a director at Women Who Code. “Once I moved to Austin, I learned about coding and learned the software in about three months and now I work at an agency.”

Many people who go into the industry of web development come from nontraditional backgrounds. Companies are looking for employees who not only have the necessary technical skills but can communicate well and are able to speak and sell to clients effectively.

“I wanted to marry my language and coding skills, and had a passion for storytelling and using code for presenting things in a different way,” said Rebecca Larson, who has a background in Asian and European languages and is a user experience designer at USAA.

While each woman said they love what they do in the tech industry, problems come with being a woman in a career largely dominated by men. According to Forbes, women take up only a quarter of the nation’s tech jobs, though they make up half of the American workforce.

“Any gender issues tend to be external. People I work with know my position and what I can do,” said Ashley Hebler, a web developer at Cox Media Group. “I work with so many smart female developers. But I do worry about how (high-profile sexual assault cases) can affect somebody who is just thinking about getting a job and hear something about that and get deterred.”

In August 2017, Google fired a software engineer who wrote an internal memo that questioned the company’s diversity efforts and argued that the low number of women in technical positions was a result of biological differences instead of discrimination.

“I have been exposed to a wide range of people and stories, and people are shocked we have this stigma (against women). America hasn’t done a great job of putting women in S.T.E.M.,” said Gibson. “A smaller percent of people are like that and the rest support you and are with you.”

Regardless of the obstacles women may often face in the web and tech industries, each panelist encouraged women who want to pursue a career in tech to not be discouraged.

“Actions speak louder than words I think, so I always do my best work,” said Kimberly Cook, who started out in the public relations field, but is now a web designer.