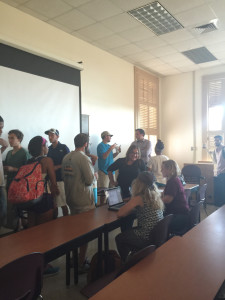 Espinoza graduated from the university in 2002 and is currently the vice president of program scheduling for Black Entertainment Television.

Goins graduated from Texas State in 2001 and recently accepted a position as a reporter for WFAA-TV in Dallas.

The alumni were introduced by Dr. Tim England, a professor in the school of journalism and mass communication at Texas State.

“Let them tell their life story because it will be an inspiration to you,” said England. “They both have worked very hard to get to the places they are now and they came through Texas State. What more inspiration do you need?”

Espinoza and Goins both answered questions from mass communication students, many of them regarding internships and networking.

“It was through my contacts and internships that I was able to get jobs,” said Espinoza.

Espinoza said it’s important to put yourself out there because people generally want to help but you have to ask.

“I had a support system that gave me a lot of confidence, “ said Espinoza. “Working with the faculty was key.”

Goins said that he didn’t have a mentor but he knew what he was interested in.

“I watched people who I thought were good at what they did,” said Goins. “If you surround yourself with quality content, writing or broadcast writing, you’ll get better.”

When asked about students reaching out to potential mentors, Espinoza said you should approach people but be careful not to take too much of their time. She said students might not want to do what she does but she knows other people.

Goins said the television market is a “who you know business.”

“TV news is such a small universe that once you get your first job, you meet people and those people will become close contacts or not but it’s such a finite universe,” said Goins.

England joined the conversation and said it’s essential to know someone before you get there in order to move in the business.

“The people you know, the connections you can make, make a big difference,” said England.

“Any experience that you have that can show you have real experience and that you’re a hard worker, put it on there,” said Espinoza.

She said she sold herself on experience with real jobs, even ones in retail and the food industry, because those jobs showed that she was hardworking and committed.

Espinoza said she had no less than six internships and those experiences were crucial in getting jobs later on, even if they only showed her what she didn’t want to do.

“The great thing about Texas State is you can get your hands dirty right here,” said Espinoza. “You can get all of your experience right here.”

Goins said local news is so important and news directors look for people who are familiar with the area.

“They want someone on air who gets how things work,” said Goins.

Espinoza and Goins wrapped up the panel by speaking about the transition to an out-of-state job. 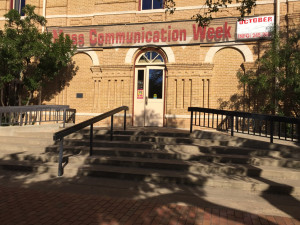 “When the opportunity knocked, that’s when I knew I had to go,” said Espinoza. “I didn’t have to sit there and think about it.”

Espinoza said she struggled the most with staying out of state, in New York for her specifically, but she encourages students to take those opportunities especially because “Texas ain’t going nowhere.”