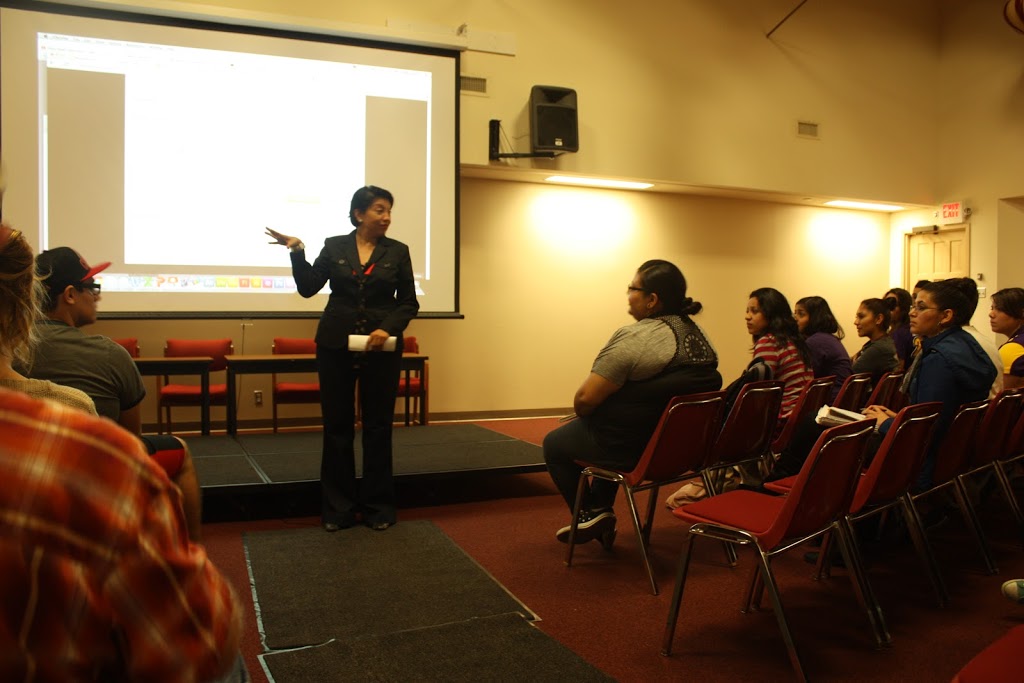 What is in a Name? Aguilar Speaks on Image in Social Media
By Arlyn LaBelle

Rebecca Aguilar understands the importance of her image. A few minutes before her presentation began, she walked down the center isle to the back of the room where a tripod and computer were positioned to broadcast her presentation live.

After a moment and a comment of the lighting, she approved of the presentation and turned to walk back to the head of the room. While passing me, she placed her hand on my shoulder.

“You’re going to be on there,” Aguilar said.

Turning around, I noticed that I was well within the range of the camera, and took a moment to adjust my hair.

Aguilar smiled at me, and took her place in the front of the room.

Aguilar spoke today at 11:00am in Old Main, discussing the importance of creating and controlling your image within the realm of social media.

During her 31 years as a TV journalist and internet freelancer, in which she has been received 48 awards and nominations including multiple grammies, Aguilar has adopted one simple motto.

“Be in control,” Aguilar said.

Aguilar stressed the importance of owning URLs for social media sites like Facebook and YouTube under your name. She discussed how social media could be a tool to display your talents, and also on how important is it to keep your image presentable for possible future employers.

“You have to establish yourself,” Aguilar said, “And that’s why social media is important.”

Aguilar learned of the possible dangers social media can present to journalists when she lost her job of 14 years due to controversy over a video story she created that was posted online. However, this was also what allowed her to begin her career as a freelance writer.

“That’s the best thing that ever happened to me, that I got fired,” Aguilar said.

Aguilar worked to engage the attendees, pulling up their blogs and youtube profiles and giving them critiques.

“I had never really though about it,” electronic media major Patrice Cross said, “After hearing her talk about it, I would agree, it’s very important to own your name.”

However, not everyone agreed with Aguilar.

“You don’t need to name yourself in every single issue,” mass communications major Brandon Searcy said.

However Aguilar expressed that the image of someone who works in the field of journalism is something to be maintained.