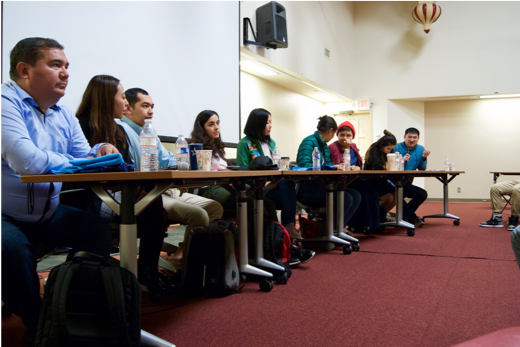 Journalism across the world: Texas State gets visit from Central Asian journalists

The Texas International Education Consortium held a panel Friday during Mass Comm Week at Texas State University with a group of professional journalists from their Central Asian Journalist-in-Residence Program.

During the panel, the journalists discussed their experiences with writing in the Central Asian countries including Kazakhstan, the Kyrgyz Republic, Tajikistan and Uzbekistan. The journalists noted the differences they have observed while interning at Texas media companies such as KXAN in Austin and the Texas Tribune in Austin.

Journalists from the TIEC program say the biggest difference between journalism in their countries and what they have observed in America is the accessibility to information and the freedom of the press to publish articles without government interference.

Assem Zhapisheva, a journalist from Kazakhstan, spoke about how receiving backlash from the government makes her realize that what she is writing about is important to society.

“Self-censorship is very prevalent in our society, but I think that we really need to identify in what is important in our work as journalists,” said Zhapisheva. “I have been detained several times while reporting on protests. You are walking on the street and get beaten and know it’s from someone in the government, but they won’t openly admit it. They will even plant drugs in the buildings of media companies to have a reason to imprison them.”

According to Zhapisheva, a journalist was arrested for libel after being the first person to accurately report a child being raped. Although the story was true, the journalist will now be imprisoned for over two years as a result of reporting the incident.

Nigora Fazliddin, a journalism from Uzbekistan, spoke about the risks taken by journalists in Central Asia having to self-sensor their writing to protect themselves from the backlash of government entities.

“It’s very difficult to investigate certain issues, especially with government censorship,” Fazliddin said. “It was even more difficult 10 years ago before the end of Soviet rule. When writing a story, I have to think can I do it, is it safe? Can I publish it?”

Fazliddin also noted the difference in how media is observed in Central Asia compared to America. According to Fazliddin, although, “newspapers are dying like dinosaurs,” citizens in Central Asia trust in the independent media to provide them with news and accurate information not given to them by the government. In contrast, in America he has observed that journalism is not as trusted due to the concept of fake news instilled by President Donald Trump.

Aigerim Toleukhanova, a freelance journalist from Kazakhstan, addressed how journalists from Central Asia are motivated to be journalists regardless of the obstacles they face with their publications due to its importance in keeping citizens informed about the current issues in their society.

“Journalism can make society a better place to live,” Toleukhanova said. “Only journalists can put pressure on government in the public interest of the people.”