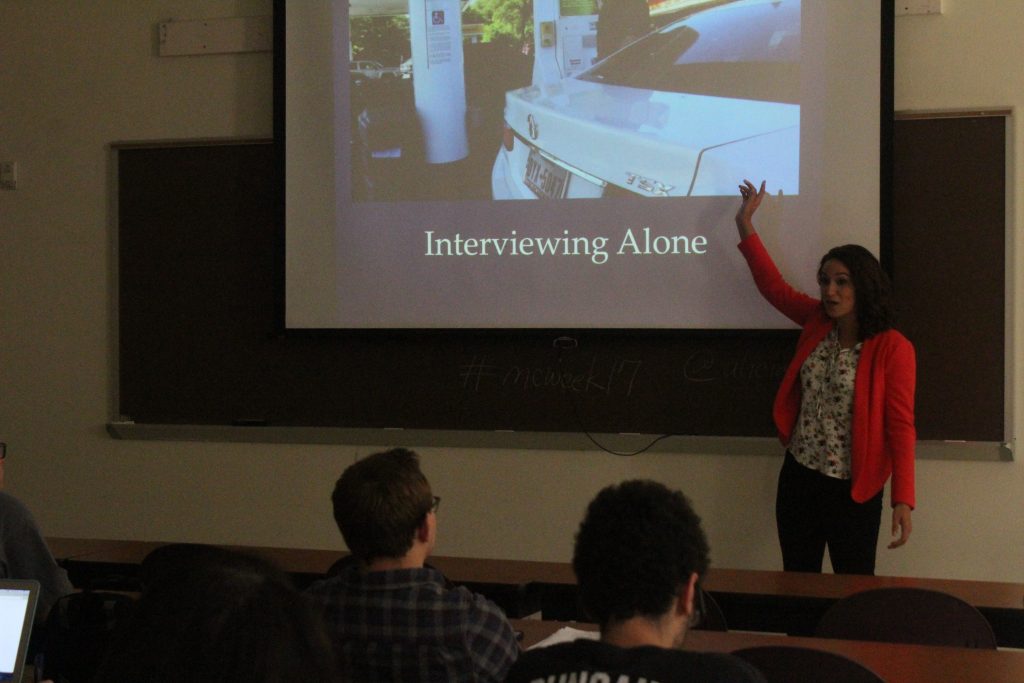 SAN MARCOS — On Oct. 17, during Mass Communication Week at Texas State, KXAN reporter Alicia Inns gave students the rundown of what her job is like as a multimedia journalist, also called backpack journalism.

Inns has been in the journalism business for about seven years and has had the responsibility of doing everything on her own: pitching ideas, conducting interviews, being a videographer, editing the videos and getting it all turned in by 5 p.m. the same day. Inns says that every second counts in this industry and you can’t afford to be distracted.

“How the heck do I do it?” Inns said. “Time management! There’s no way you can do this job without managing your time really well.”

Along with time management, Inns tells students three elements to create a good, effective story, whether it’s an upbeat, positive story or a sad or controversial one.

“You need good characters; something that makes you feel something, like brings an emotion out of you,” Inns said. “And you need moments that’ll make the audience remember the story or take something away from it.”

As an experienced multimedia journalist, Inns has trained herself to know what to look for in a story as soon as she gets on the scene, more so because she has no time to waste. Because she has to do everything herself, everything that a regular two-man crew would do, Inns says things can get pretty awkward.

“It’s worth having a conversation with someone before shoving a camera in their face,” Inns said. “If I had a photographer with me, they could set up the equipment while I make the person comfortable when I put the mic on them. But I don’t, I interview everyone alone.”

While Inns took questions from the audience, electronic media major Alex Gibbs asked Inns how she makes people more comfortable as one person.

“Honestly, the biggest lesson I’ve learned, even from people who have photographers [with them] is, just keep talking to them,” Inns said.

Another journalism student from the audience asked why Inns decides to do it all herself. Inns ensure students that there are benefits to being an independent journalist in the field.

“[As a multimedia journalist], you have more creative control and flexibility. You get to pitch your own story then go cover them,” Inns said. “More importantly, I leave the newsroom everyday like ‘Yea I just did that; that’s all mine.’ There’s a pride in it. Own it.”