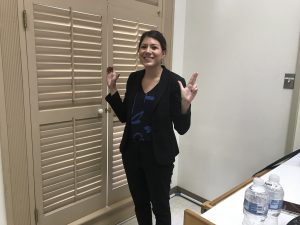 SAN MARCOS – Texas State University Alum Kim Castelluccio spoke on Tuesday about what being in the advertising industry consists of and what it takes to create a digital media strategy.

Castelluccio worked as an assistant media planner for LatinWorks, but changed career paths and currently works at 97 Degrees West in Austin, as a digital media supervisor. Speaking for about an hour, she emphasized many times how much of a team effort it is to create the perfect ad.

Castelluccio said she spends much of her time bouncing ideas back and forth with her teammates, and tries to be as open and transparent with her clients as possible to avoid any conflict.

Vera Fischer, owner of 97 Degrees West and Texas State University professor, was also in attendance to this event, chiming in here and there about what it is to work in the advertising industry.

Opening up to the audience about what kind of people should and should not work in advertising, Fischer said it is not a place for very sensitive or shy people.

“If you’re not comfortable talking about money, you’re going to have a really hard time in this industry,” said Fischer. “If you get too emotionally connected to stuff, you’re going to suffer.”

The event lasted a little under an hour, and ended with the floor being opened up to the audience for questions or comments, giving advertising students a chance to ask the speakers any questions that went unanswered or for advice to future advertising agents.

Advertising major Mason Parrott said he was pleased with how this event went, and it made him excited for whatever future job he finds after graduation.

“I was already looking forward to life after graduation, but now I know I am ready,” said Parrott. “Hearing what kinds of people they work with, and knowing that this is what I will get to be doing, I’m more than ready.”