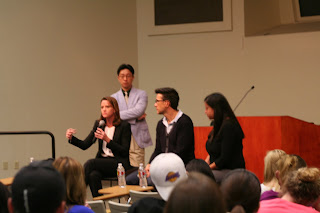 Students have more diverse career options than ever in international communications, public relations and advertising; according to Ashley Moran, consultant at Pragma Consulting.

“It’s getting easier than ever to transfer knowledge internationally,” Moran said. “I think there are more opportunities, especially for women.”

Moran contributed to a panel presentation called International Ad/Comm Tuesday along with Charles Webre, creative partner for Sherry Matthews Advocacy Marketing in Austin Texas, and Gretel A. Perera, who works in corporate communications for Dell Computers in Round Rock.

While all of the panelists now live and work in Texas, they have had extensive experience working and living abroad.

Perera lived in seven different countries growing up, including Colombia and Russia. She graduated from the University of Texas in public relations,and speaks English, Spanish, Russian and Portuguese.

Perera emphasized the importance of learning other languages, and said that her first job had her traveling to Peru because none of her colleagues spoke Spanish.

“It’s very important to appreciate different cultures,” Perera said. “Try to learn as much as possible (before traveling) and immerse yourself in the culture and language.”

Moran, who also graduated from U.T. in public relations, worked most recently in Iraq. She said the work was intense and stressful. “It’s exciting but takes a toll on the sleep cycle.”

As far as the conditions in Iraq, Moran said there was danger, but that she felt reasonably safe.

All three of the panelists emphasized that the rewards of traveling and working in other cultures far outweigh the challenges.

Webre talked about the challenges of living as an expatriate in England and France.

“There is a loneliness there, because they view you as an American abroad,” Webre said. “You need to be self-reliant, but also try not to distance yourself from the local culture.”

Webre said his children learned fluent French from living in both countries.

“The world is being globalized at a very fast rate, so it’s good for students to know what kind of skills to have in communications,” he said.

Webre said that people need to choose if working internationally is right for them.

“To me it’s a personal aspiration,” he said. “If people want to experience it they should take that first step.”

Photo by by Larisa Michelle Tate