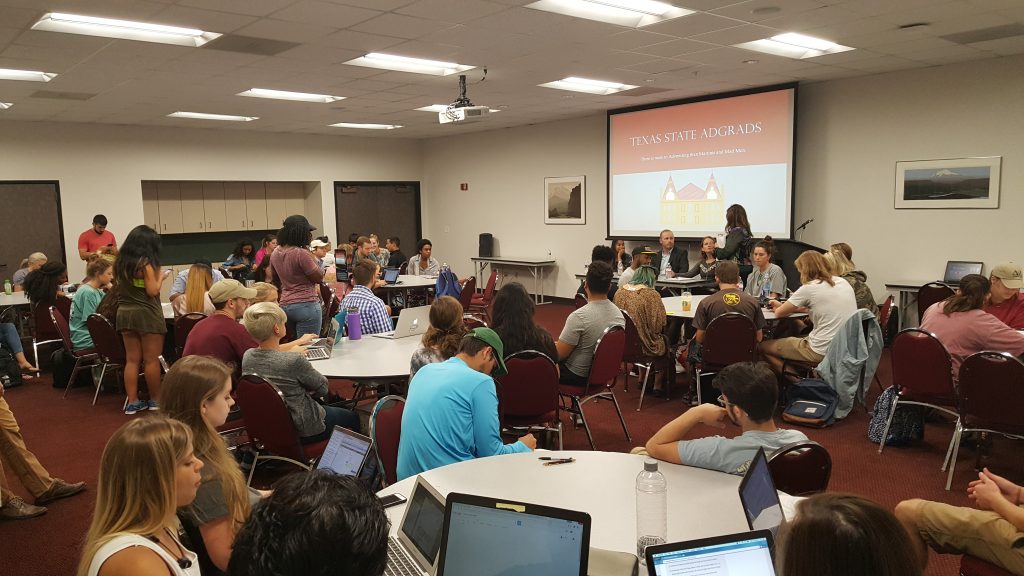 Ad grads give tips for success at an ad agency

Several Texas State advertising alumni returned to campus Wednesday to talk to current advertising students about becoming a professional at an advertising agency.

Matt Kemp, an account services manager at Latinworks, talked about working with the different branches of his agency on a broadcast ad campaign for the Texas Lottery.

“We had two different creative teams and two different planning teams working on this commercial,” Kemp said. “Once we went through the creative process with the client, we had to get two different production teams involved. It was just incredible seeing so many people putting so many hours into this one project and then two and a half months later we had this really cool commercial.”

Next, moderator Jenny Buschhorn introduced the topic of how advertising is changing from more traditional advertising campaigns, like radio or television, to a focus on digital advertising. Sabrina Jordan, media director at GSD&M, asked the audience if anyone had watched television in the past week and told everyone to look around at the show of hands.

“Even now, TV is the fastest way to reach somebody,” Jordan said. “Time spent with watching TV may be decreasing, but 91 percent of adults can still be reached through television advertising. You just have to take a step back, know your audience and know the different ways to target somebody in that audience.”

The panelists also spoke to the audience about the importance of internships and staying motivated at the beginning of their careers. Jordan advised students not to wait until their last semester before applying for internships.

“That’s the biggest mistake you can make,” Jordan said. “At top-tier agencies you’ll have between 500 and 1,000 internship applications per semester, and the best intern slots are going to go to return interns who were there last semester, so don’t wait.”

Divya Darsi, a strategist at Y&R Austin, offered her advice on working as an intern at an advertising agency.

“Say yes to everything,” Darsi said. “Reach out and ask if you can shadow people, because it’s totally OK if you don’t know what to do. Everyone was a student once and they want to help students.”

Junior advertising major Sam King said he is optimistic about working at an advertising agency after attending the panel.

“There are a lot more jobs available than I thought,” King said. “I’ve got a lot of hope about getting a career with a good agency after seeing how successful the panelists have been in only a few years.”