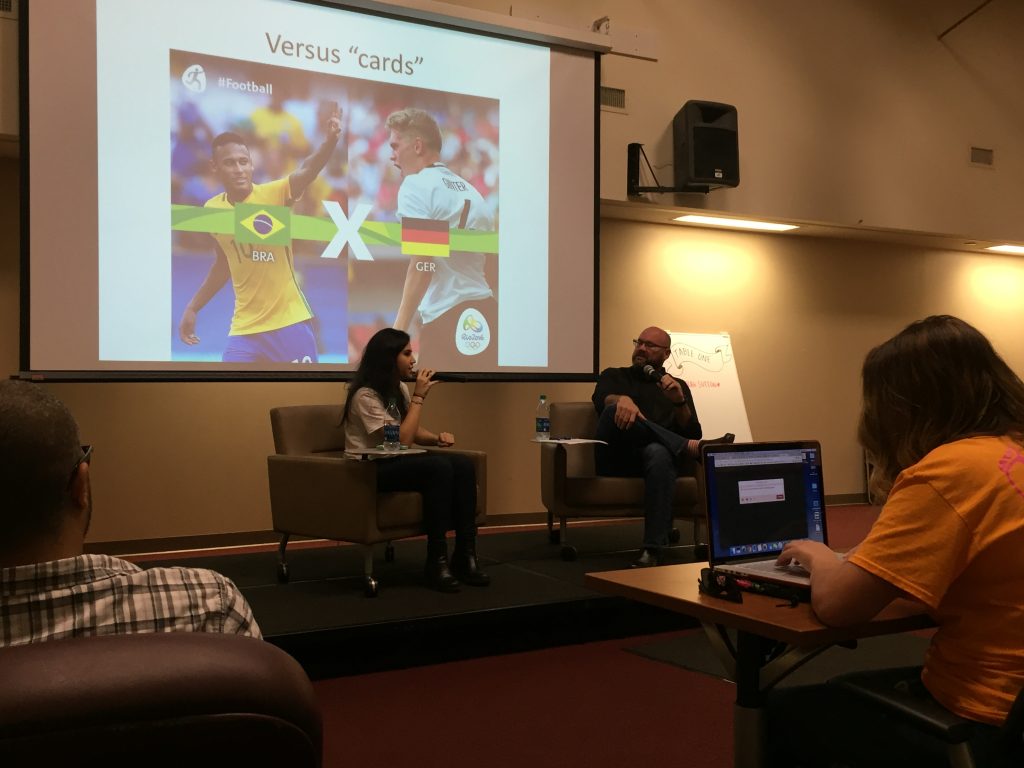 SAN MARCOS- A social media editor for the 2016 Rio Olympics came to Texas State University’s Mass Comm Week Thursday to speak to students about the planning and execution of social media strategy for large events.

Virginia Alves, a Texas State graduate, was born in Brazil and moved to Texas when she was two years old. Upon graduation, she decided to move back to Brazil and was hired by the Rio Organizing Committee where she lead the English social media department. Though connections originally got her the job, Alves quickly realized her own hard work was what mattered.

“I found out that it was how much I worked and that I made the job for me,” said Alves. “There were people that didn’t work hard and took the job for granted and let it go by and it made a difference.”

Shannon Parker, a journalism major, was also present for Alves’ talk and plans to pursue a career in England as a journalist and looks forward to the hardships she might face.

“Virginia didn’t immediately have a job when she went to Brazil and neither will I,” said Parker. “I just plan on going and making the most of my time there and doing what I can to get my name out there.”

Alves was able to move into a leadership position very quickly by showing that she was capable of handling the stress and organization the job required, as well as working long hours.

Alyssa Robinson was in the audience and said that she had not realized how much time a social media editor actually devoted to the job.

“Virginia had mentioned that she would wake up at 7:30 a.m., send a tweet, and then go back to sleep for a few minutes before waking to tweet again,” said Robinson. “You still have to be present on social media whether you’re at the event or not.”

Alves described challenges that she faced during her six-month employment, including transportation issues and a jaguar fiasco. She said that providing a good face for the company and making sure that your posts reflect that is what is most important, especially when things aren’t going smoothly.

“As the social media team, you are the face of the company,” said Alves. “I had a background in public relations so I understood that, but my two other colleagues on occasion did not.”

Alves expressed the importance of making sure criticism is handled as professionally as possible, as well as the significance of appearing in control. She said that she had faced several potential disasters, but with the right amount of professionalism and a prompt response time, the Rio 2016 name was salvaged.

When asked for advice to students looking to pursue a job overseas, Alves’ response was encouraging.

“Go for it and don’t be scared,” Alves said. “ It’s not a matter of being fluent to work around the world. You can go anywhere to find a job. You learn as you go.”

Haley Brown, another member of the audience, responded to Alves’ advice.

“She gave me a lot of hope that my dreams aren’t too big,” said Brown. “I’ve always been worried that since I only speak English that it would be difficult to get a job, but difficult doesn’t mean impossible.” 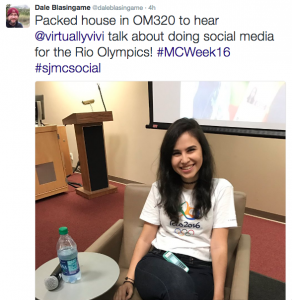