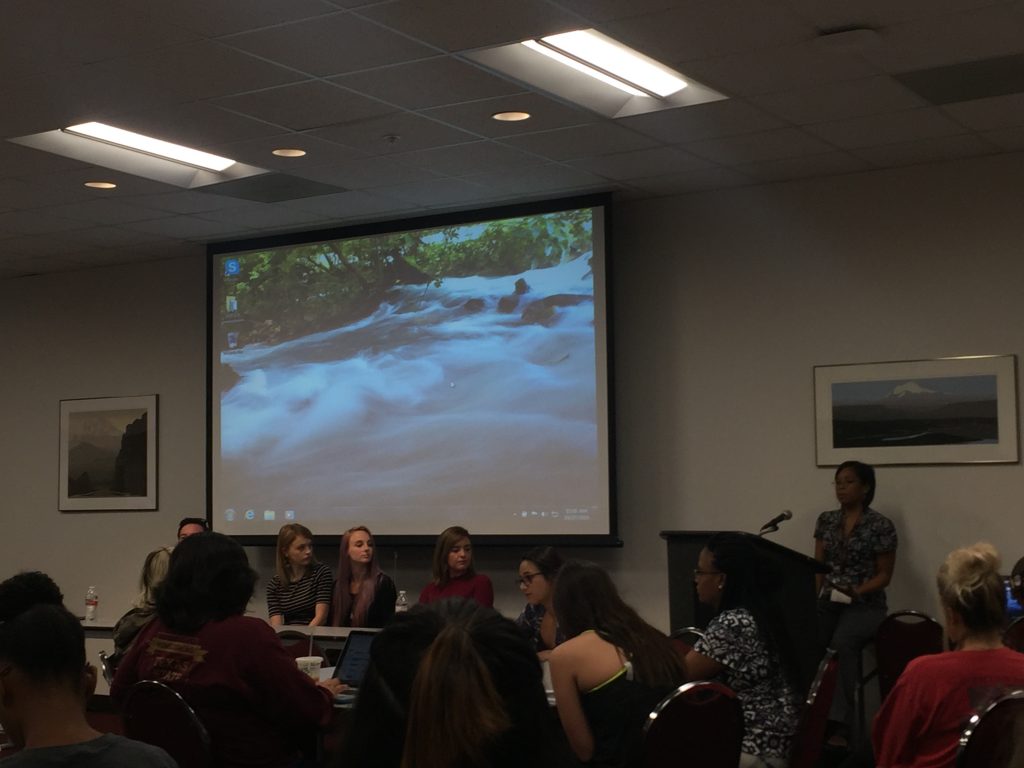 Getting Hired in the Digital World

A panel of four digital media professionals spoke during Mass Comm Week Thursday to share with current students their insight on what is necessary for a career in digital media, as well as their journey to where they are now.

The panel was asked questions regarding what it takes to make it in the digital world and what hardships they deal with, as well as what drove them to their respective careers.

Cody Herring, a digital strategist for White Hat Agency, said that job security was a big part of why he chose a career in digital media.

“You’re never not a student when it comes to social media,” Herring said.

The constant growth and evolution of the field enticed him enough to get a master’s degree in integrated marketing.

Andrea Windmeyer, a creative strategist for Unique Influence, said that she went through a few internships before she decided on her career path and is now very happy with her choice. She loves the virtual reality aspect of video design and is excited to see what the future holds for her field.

Taylor Wood, a marketing analyst for Resignation Media, said that she found a mentor and researched companies she was interested in working for. Wood suggested investigating what the average salary for a certain career is and negotiating with a potential employer, as well as doing ample research on the company to prove interest.

The fourth panelist, Emily Burns, an associate editor for The Berry, advised students to explore the job market a bit before deciding what career path to choose.

“There’s something to be said for honing your goals, but it’s good to dabble in everything,” Burns said. “Everything is experience.”

Chad Jacobs, a member of the audience, said that he is more inclined to go try things that he hasn’t been drawn to before based on the advice of the panel.

“There are companies that I avoided applying for because of how big they are,” said Jacobs. “But it seems that I shouldn’t rule anything out. Anything is possible as long as my resume and qualifications align with the job.”

The panel gave advice to students that will soon be entering the workforce on how to choose a career.

Herring advised students to find out what they are good at and go from there.

Gracie Roberts, an audience member, responded to the panel’s advice of trying not to mold herself to fit a job.

“I’ve always thought that you have to become the perfect candidate for a job,” said Roberts. “That doesn’t seem to be the case and that makes me eager to find a job that fits me.”

A third member of the audience, Seana Garcia, expressed her appreciation for Mass Comm Week altogether.

“I had no idea what this week had in store,” said Garcia. “I went to the first presentation as an assignment for a class and I have been attending all week because they are so helpful. That panel in particular gave me a lot of insight into what I need to do to make sure I have a job in an area I’m interested in.”

Though Mass Comm Week is coming to a close, the experience learned during this week will impact the future of many students for years to come.