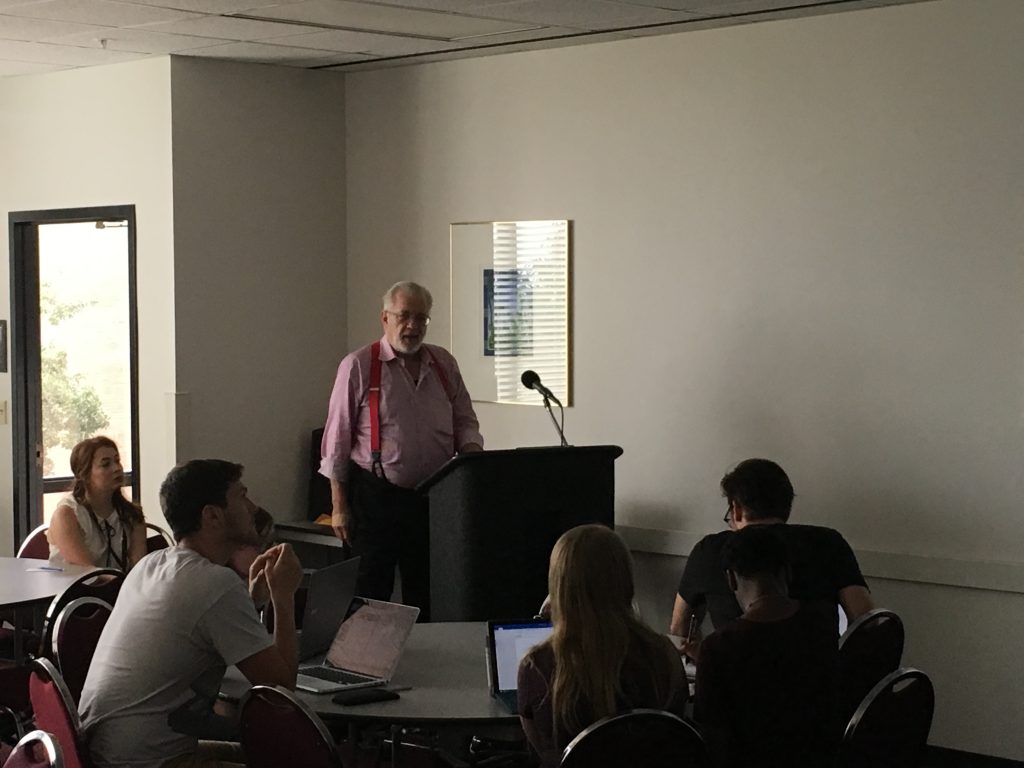 Bendinger’s message to students was that they are in the middle of a media revolution with a lot of opportunity, but where more is required to land a job compared to previous generations.

“These days a lot of you must invent your jobs,” Bendinger said. “The companies you want to work for are too busy to look for you, so you have to look for them.”

One of the many branding strategies Bendinger advocated using was what he called a three-up, which he said was a personal brand logo printed onto a sheet of card stock three times and then cut into three separate sheets. These three-ups can then be used like stationery when communicating with potential employers or other contacts.

“I know a professor whose students are getting jobs with three three-ups,” Bendinger said. “One saying hello and asking for an interview, one with their brand story, and one with a mini-resume. People are so knocked out to get a consistent brand message that those students get jobs.”

Bendinger also said every student in the audience should be building a personal database of their contacts to include relatives, friends in college, potential employers, and even high school classmates. He said a database can be used to stay in touch with a wide range of people who may eventually pass along valuable opportunities.

For Bendinger, while the various strategies he talked about seemed clear in retrospect, he said it was more of a learning process.

“You’re just figuring things out as you go along and trying to make the best decisions,” Bendinger said. “If you make the wrong decision, try to make it a valuable lesson and not a bad habit.”

CJ Bass, a senior majoring in advertising who was in the audience, said Bendinger’s lecture was inspirational and had a lot of material he could relate to. Bass said the most important thing he took away from the lecture was personal brand strategies such as having a personal website.

Assistant Professor Mike Devlin brought all the students from one of the advertising classes he teaches to Bendinger’s lecture. Devlin said one thing he hopes his students picked up on was the importance of visual storytelling.

“The days of landing a job with long prose are over,” Devlin said. “You need to be able to tell a story quickly and grab someone’s attention in seconds.”

Lauren Vrana, an advertising senior in the audience, said she liked how detailed Bendinger was during his lecture. Vrana said the most important things she took away from the lecture was the need to create a personal website and begin building her database of contacts.