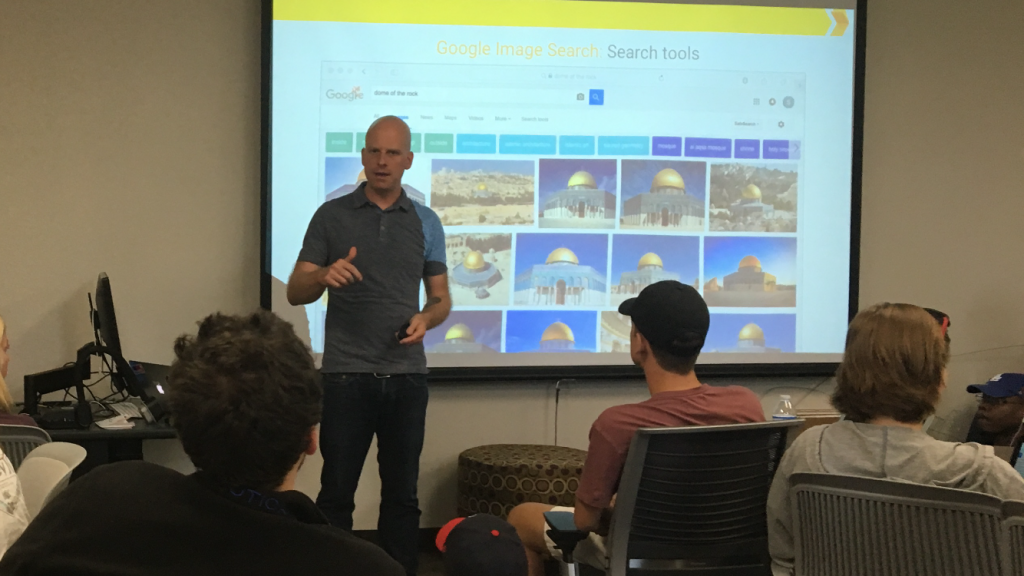 “For me this is really exciting, but for journalists now it is causing a lot of anxiety,” Whitaker said.

The development of labs, such as Google News Lab, is an indicator that media outlets are becoming more accepting of digital tools, Whitaker said.

“There is a lot more to Google than I thought,” said Christina Tran, public relations junior. “I thought it was a simple search engine, but there are so many other modifications.”

Google News Lab offers a variety of courses on its website to train students on how to use digital tools. Whitaker said one day these classes will offer a certification when successfully completed so that can be use on resumes.

Alicia Vazquez said she would use some of the technology Whitaker highlighted, especially a 360 degree photo app called Street View.

“I think it is awesome to create a (360 degree) photo without a special camera,” said Vazquez, a public relations senior.

Through a partnership with the Society of Professional Journalists, Google News Lab offers a free training program to any newsroom or organization which has 25 or more participants. A professional will travel to the host location to train journalists on Google tools.

So far 40,000 journalists in 150 newsrooms and 38 countries have been trained through this program.

“If I was going to focus on any one thing, when you go home go to our website and check out image verification,” Whitaker said. “Look at the First Draft Coalition.”

First Draft Coalition is an image verification service that is featured in one of Google New Lab’s training courses on their website.

“There are so many tools there are out there for journalists to use, and I never knew,” said Alison Bryce, a journalism senior.

Bryce said her biggest take away from Whitaker’s speech was the tools available to journalist and the need to use them to keep up with the future of journalism.